Menu
Atlassian launches a Jira for every team

Atlassian today announced a new edition of its Jira project management tool, Jira Work Management. The company has long been on a journey of bringing Jira to teams beyond the software development groups it started out with. With Jira Service Management, it is successfully doing that with IT teams. With Jira Core, it also moved further in this direction, but Jira Work Management takes this a step further (and will replace Jira Core). The idea here is to offer a version of Jira that enables teams across marketing, HR, finance, design and other groups to manage their work and — if needed — connect it to that of a company’s development teams.

“JIRA Software’s this de-facto standard,” Atlassian’s VP of Product Noah Wasmer told me. “We’re making just huge inroads with JIRA Service Management right now, bringing IT teams into that loop. We have over 100,000 customers now on those two products. So it’s really doing incredibly well. But one of the things that CIOs say is that it’s really tough to put JIRA Software in front of an HR team and the legal team. They often ask, what is code? What is a pull request?”

Wasmer also noted that even though Jira Software is specifically meant for developers, about half of its users are already in other teams that work with these development teams. “We think that [Jira Work Management] gives them the more contextually relevant tool — a tool that actually helps them accelerate and move faster,” Wasmer said.

With Jira Work Management, the company is looking at making it easier for any team to track and manage their work in what Wasmer described as a “universal system and family of product.” As company’s look at how to do remote and hybrid work, Atlassian believes that they’ll need this kind of core product to keep track of the work that is being done. But it’s also about the simple fact that every business is now a software business and while every team’s work touches upon this, marketing and design teams often still work in their own silos.

These different teams, though, also have quite different expectations of the user interface they need to manage their work most effectively. So while Jira Work Management features all of the automation features and privacy controls of its brethren, it is based around a slightly different and simplified user interface than Jira Software, for example.

What’s even more important, though, is that Jira Work Management offers a variety of views for teams to enter and manipulate their data. To get new users onboarded quickly, Atlassian built a set of templates for some of the most common use cases it expects, though users are obviously free to customize all these different views to their hearts’ — and business needs’ — content.

Atlassian also changed some of the language around Jira tickets. There are no ‘stories’ and ‘bugs’ in Jira Work Management (unless you add them yourself) and instead, these templates use words like ‘tasks,’ ‘assets’ (for design use cases) or ‘candidates’ (for HR).

Given the fact that spreadsheets are the universal language of business, it’s maybe no surprise that the List view is core here, with an Excel/Airtable-like experience that should immediately feel familiar to any business user. It’s in-line editable and completely abstracts away the usual Jira ticket, even though underneath, it’s the same taxonomy and infrastructure.

“We really wanted people to walk into this product and just understand that there is work that needs to be done,” Chase Wilson, the head of product marketing for Jira Work Management, said. He noted that the team worked on making the experience feel snappy. 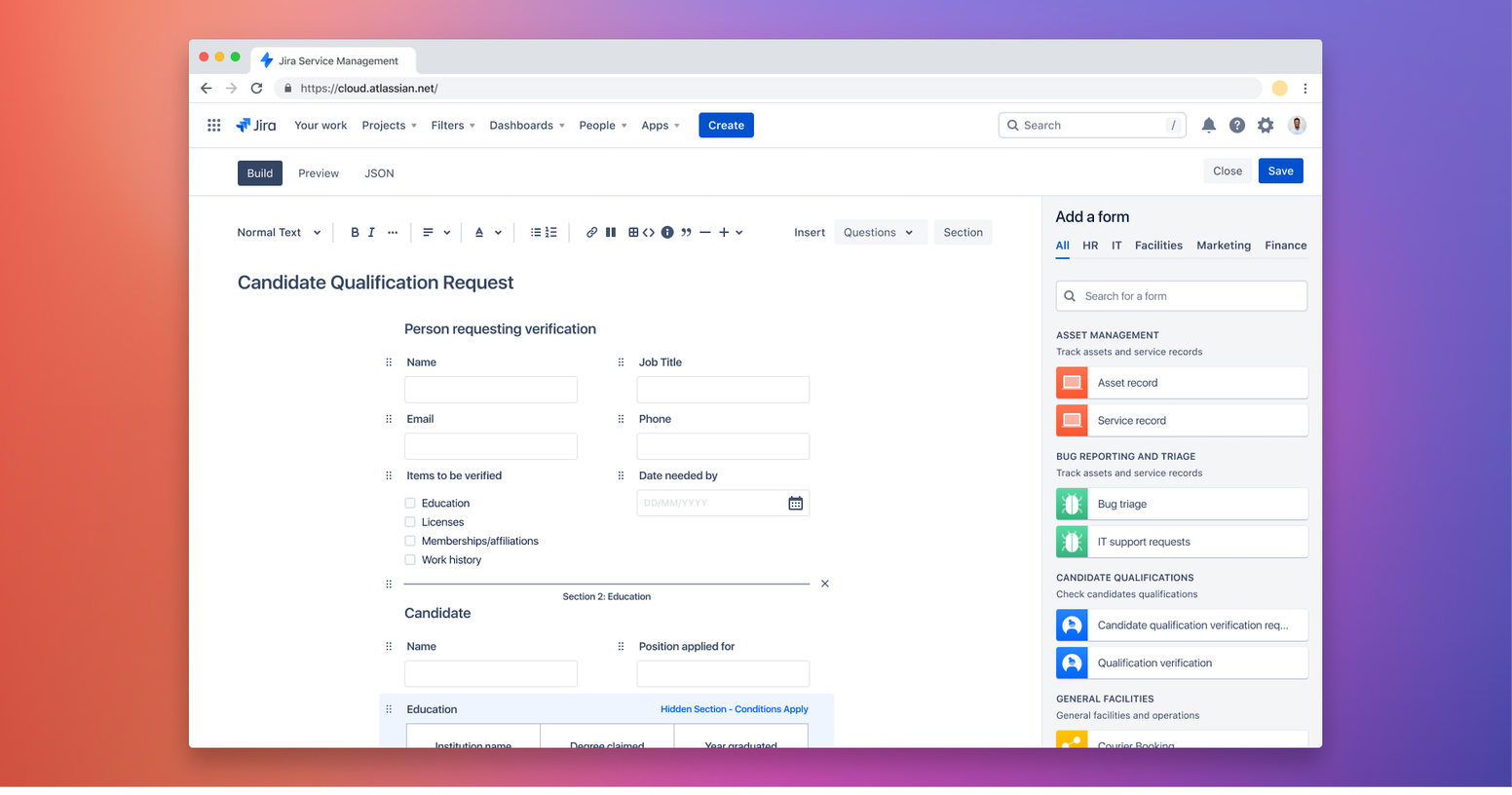 The other view available are pretty straightforward a calendar and Gantt chart-like timeline view, as well as the traditional Kanban board that has long been at the core of Jira (and Agile in general).

Jira Work Management also lets users build forms, using a drag and drop editor that makes it easy for anybody inside an organization to build forms and collect requests that way. Only a few weeks ago, Atlassian announced the acquisition of ThinkTilt, the company behind the popular no-code from builder ProForma and it looks like it is already putting this acquisition to work here.

As Wasmer stressed, Jira Work Management is meant to help different teams get work done in a way that works best for them. But because Jira is now a family of products, it also enables a lot more cross-team collaboration. That means a development team that is working on implementing a GDPR requirement can now build a workflow that ties in with the project board for a legal team that then allows legal to hold up a software release until it approves this new feature.

“We hear about this all the time today,” he said. “They just stick the legal team into JIRA Software — and it over-inundates them with information that’s not relevant to what they’re trying to get done. Now we can expose them. And we also then get that legal team, that marketing team, exposed to different templates for different work. What they’re finding is that once they get used to it for that must-do use case, they start saying: Well, hey, why don’t I use this for contract approvals at the end of the quarter?’”

As for pricing, Atlassian follows its same standard template here, offering a free tier for teams with up to 10 users and then the paid tiers start at $5/user/month, with discounts for larger teams.

It’s worth noting that Jira Work Management is the first product to come out of Point A, Atlassian’s new innovation program “dedicated to connecting early adopter customers with product teams to build the next generation of teamwork tools.”