Seattle-based Edge Delta, a startup that is building a modern distributed monitoring stack that is competing directly with industry heavyweights like Splunk, New Relic and Datadog, today announced that it has raised a $15 million Series A funding round led by Menlo Ventures and Tim Tully, the former CTO of Splunk. Previous investors MaC Venture Capital and Amity Ventures also participated in this round, which brings the company’s total funding to date to $18 million.

“Our thesis is that there’s no way that enterprises today can continue to analyze all their data in real time,” said Edge Delta co-founder and CEO Ozan Unlu, who has worked in the observability space for about 15 years already (including at Microsoft and Sumo Logic). “The way that it was traditionally done with these primitive, centralized models — there’s just too much data. It worked 10 years ago, but gigabytes turned into terabytes and now terabytes are turning into petabytes. That whole model is breaking down.”

He acknowledges that traditional big data warehousing works quite well for business intelligence and analytics use cases. But that’s not real-time and also involves moving a lot of data from where it’s generated to a centralized warehouse. The promise of Edge Delta is that it can offer all of the capabilities of this centralized model by allowing enterprises to start to analyze their logs, metrics, traces and other telemetry right at the source. This, in turn, also allows them to get visibility into all of the data that’s generated there, instead of many of today’s systems, which only provide insights into a small slice of this information.

While competing services tend to have agents that run on a customer’s machine, but typically only compress the data, encrypt it and then send it on to its final destination, Edge Delta’s agent starts analyzing the data right at the local level. With that, if you want to, for example, graph error rates from your Kubernetes cluster, you wouldn’t have to gather all of this data and send it off to your data warehouse where it has to be indexed before it can be analyzed and graphed.

With Edge Delta, you could instead have every single node draw its own graph, which Edge Delta can then combine later on. With this, Edge Delta argues, its agent is able to offer significant performance benefits, often by orders of magnitude. This also allows businesses to run their machine learning models at the edge, as well. 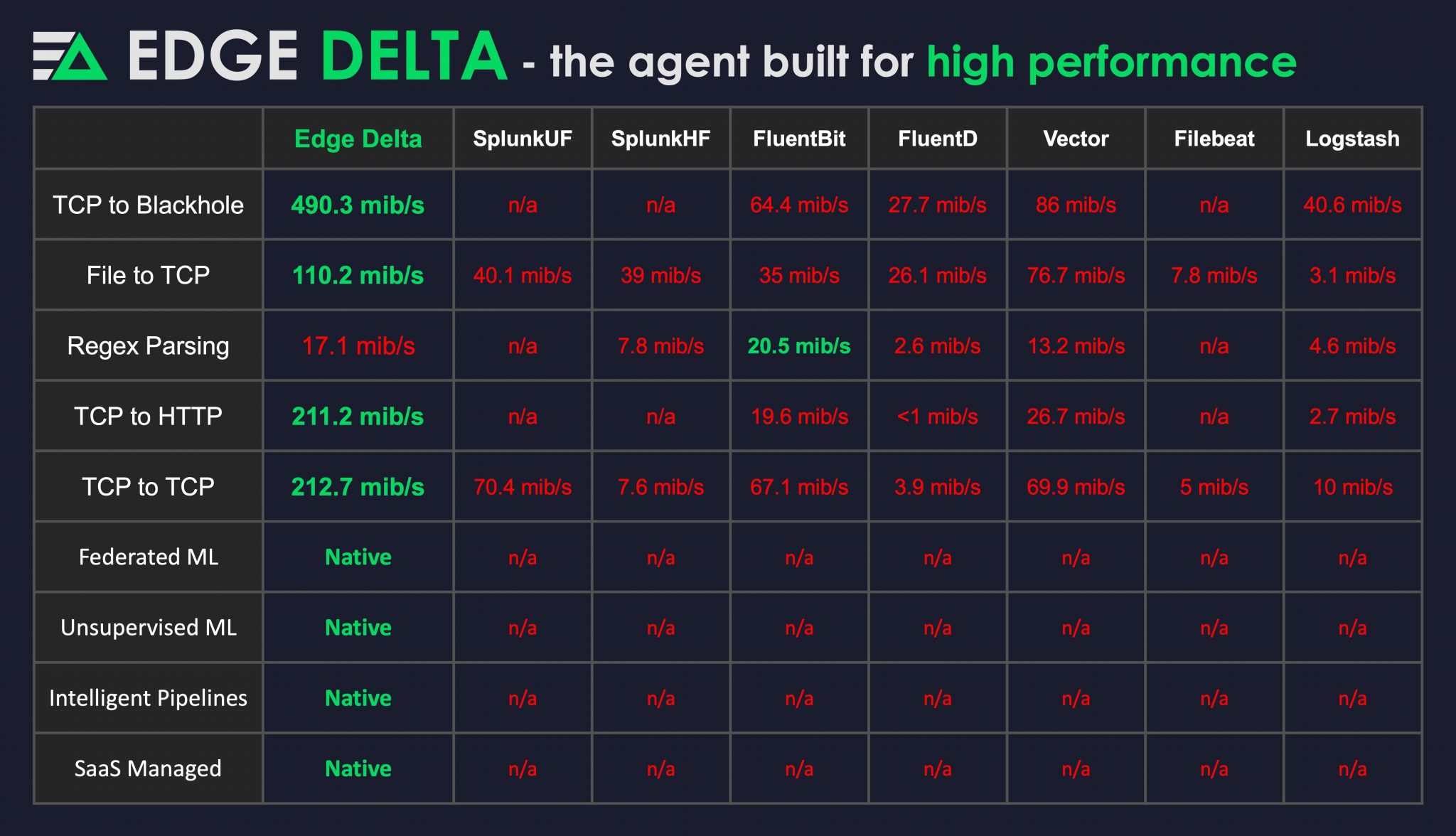 “What I saw before I was leaving Splunk was that people were sort of being choosy about where they put workloads for a variety of reasons, including cost control,” said Menlo Ventures’ Tim Tully, who joined the firm only a couple of months ago. “So this idea that you can move some of the compute down to the edge and lower latency and do machine learning at the edge in a distributed way was incredibly fascinating to me.”

Edge Delta is able to offer a significantly cheaper service, in large part because it doesn’t have to run a lot of compute and manage huge storage pools itself since a lot of that is handled at the edge. And while the customers obviously still incur some overhead to provision this compute power, it’s still significantly less than what they would be paying for a comparable service. The company argues that it typically sees about a 90 percent improvement in total cost of ownership compared to traditional centralized services. 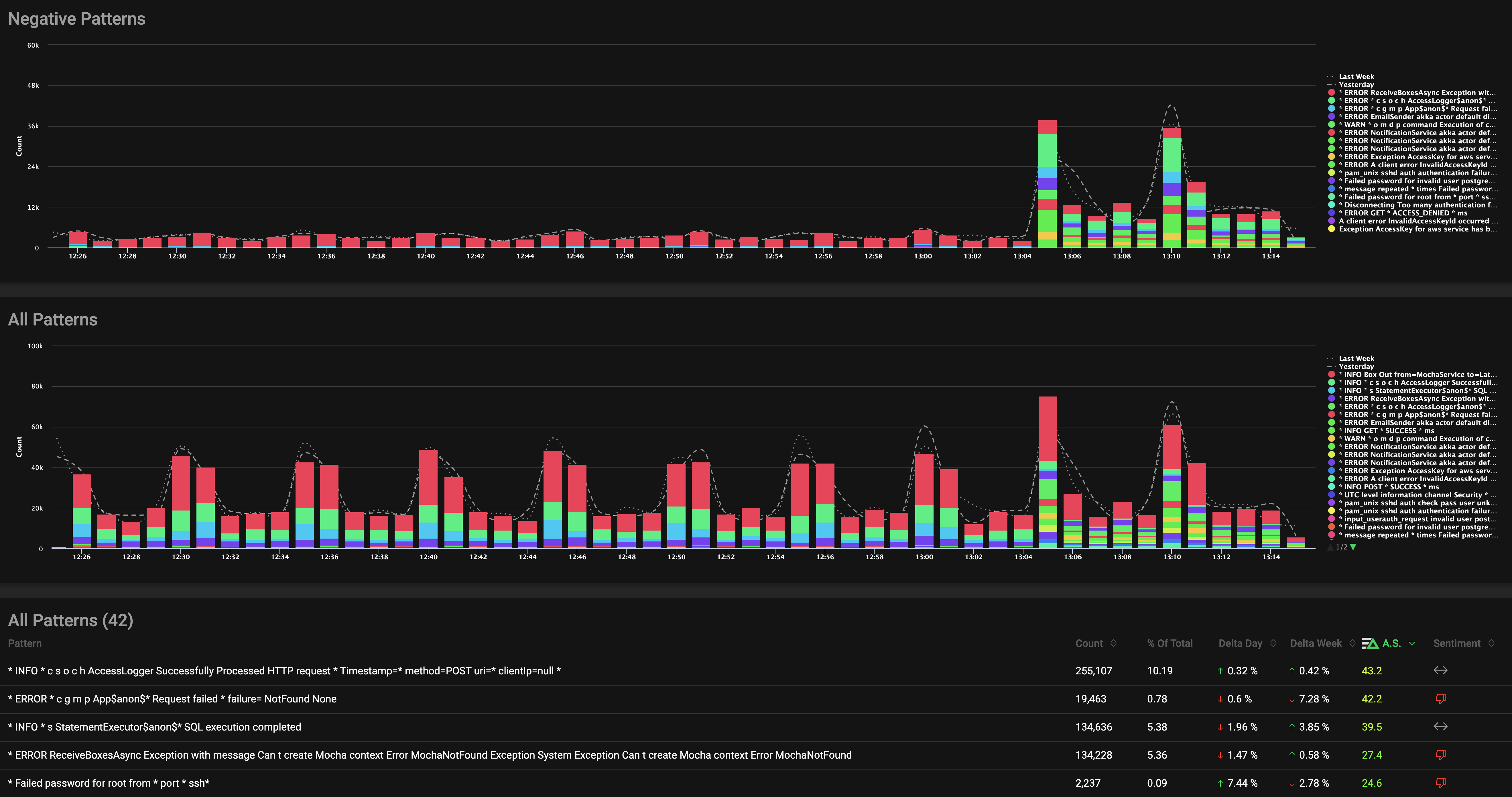 Edge Delta charges based on volume and it is not shy to compare its prices with Splunk’s and does so right on its pricing calculator. Indeed, in talking to Tully and Unlu, Splunk was clearly on everybody’s mind.

“There’s kind of this concept of unbundling of Splunk,” Unlu said. “You have Snowflake and the data warehouse solutions coming in from one side, and they’re saying, ‘hey, if you don’t care about real time, go use us.’ And then we’re the other half of the equation, which is: actually there’s a lot of real-time operational use cases and this model is actually better for those massive stream processing datasets that you required to analyze in real time.”

But despite this competition, Edge Delta can still integrate with Splunk and similar services. Users can still take their data, ingest it through Edge Delta and then pass it on to the likes of Sumo Logic, Splunk, AWS’s S3 and other solutions. 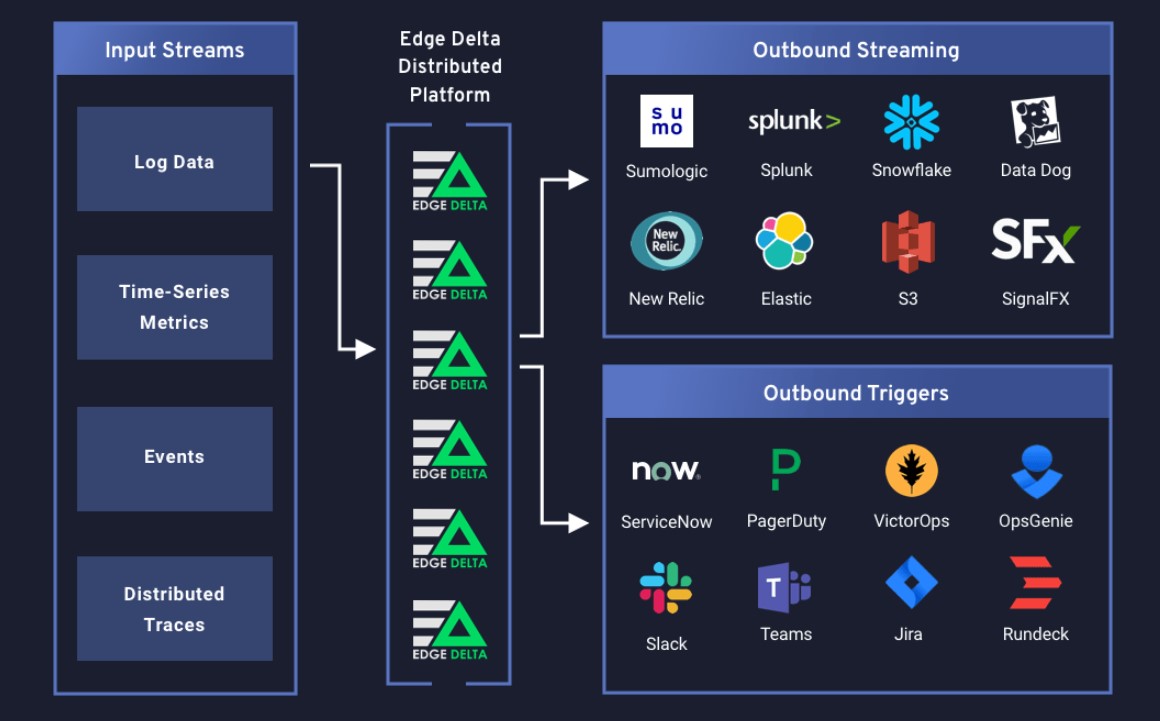 “If you follow the trajectory of Splunk, we had this whole idea of building this business around IoT and Splunk at the Edge — and we never really quite got there,” Tully said. “I think what we’re winding up seeing collectively is the edge actually means something a little bit different. […] The advances in distributed computing and sophistication of hardware at the edge allows these types of problems to be solved at a lower cost and lower latency.”

The Edge Delta team plans to use the new funding to expand its team and support all of the new customers that have shown interest in the product. For that, it is building out its go-to-market and marketing teams, as well as its customer success and support teams.