Hello and welcome back to our regular morning look at private companies, public markets and the grey space in between.

Today we’re exploring the 2019 IPO cohort from a capital-in perspective. How much did tech companies going public in 2019 raise before they went public, and what impact that did that have on their valuation when they debuted?

Looking ahead, the tech startups and other venture-backed companies expected to go public in 2020 will include a similar mix of mid-sized offerings, unicorn debuts and perhaps a huge direct listing. What we’ve seen in 2019 should be a good prelude to the 2020 IPO market.

With that in mind, let’s examine how much money tech companies that went public this year raised before their IPO. Spoiler: It’s a lot more than was normal just a few years ago. Afterwards, I have a question regarding what to call companies in the $100 million ARR club (more here) that we’ve been exploring lately. Let’s go!

According to CBInsights’ recent IPO 2020 IPO report, there’s a sharp, upward swing in the amount of capital that tech companies raise before they go public. It’s so steep that the data draw a nearly linear breakout from a preceding, comfortable normal.

There are two distinct periods; from 2012 to 2015, raising up to $100 million was the norm (median) for tech companies going public. That’s still a lot of cash, mind.

The second period is more exciting. From 2016 on we can see a private capital arms race in which tech companies going public stacked ever-greater sums under their mattresses before debuting. This is generally consistent with a different trend that you are also aware of, namely the rise of $100 million financings.

Before we turn back to the CBInsights data, let’s observe a chart from Crunchbase News that underscores the simply astounding rise of $100 million financings that was published just a few weeks ago. As you look at this chart, remember that prior to 2016, more than half of venture-backed technology companies going public had raised less than $100 million total: 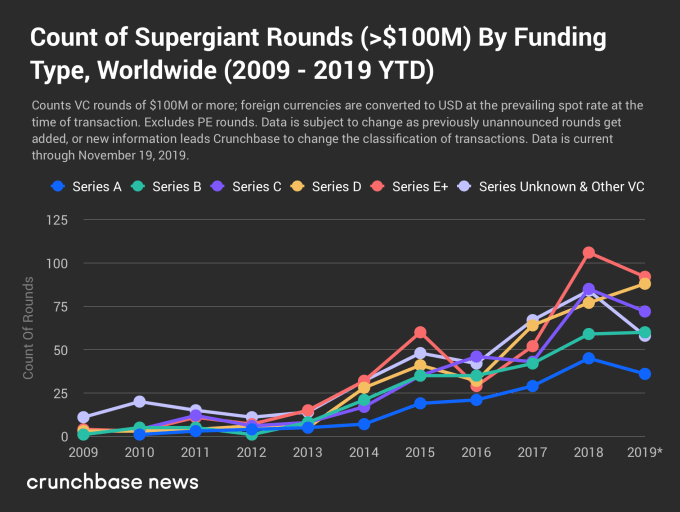