Menu
The cloud infrastructure market hit $129B in 2020

The cloud infrastructure market in 2020 reflected society itself, with the richest companies getting richer and the ones at the bottom of the market getting poorer. It grew to $129 billion for the year, according to data from Synergy Research Group. That’s up from around $97 billion in 2019.

I’ve heard from every founder under the sun for the last 9 months that the pandemic was accelerating digital transformation, and that a big part of that was an expedited shift to the cloud. These numbers would seem to bear that out.

Customer experience and digital transformation concepts are merging during the pandemic

As usual the big three were Amazon, Microsoft and Google, with Alibaba now firmly entrenched in fourth place and IBM falling back to fifth. But Microsoft grew more quickly than rival Amazon, reaching 20% market share at the end of 2020 for the first time. Keep in mind that the Redmond-based software giant has now doubled its share since 2017. That’s remarkably rapid rapid growth. Meanwhile Google and Alibaba took home 9% and 6% respectively.

Here’s what that all looks like in chart form:

Amazon is an interesting case in that it has plateaued at around 33% for four straight years of Synergy data, but because it’s one-third share of an increasingly growing market, that means that it has kept growing its public cloud revenues as the category itself has expanded.

Amazon closed out the year with $12.74 billion in Q4 AWS revenue, putting it on a run rate of over just over $50 billion for the first time. That was up from $11.6 billion the prior quarter. While Microsoft’s numbers are always difficult to parse from its earning’s reports, doing the math of 20% of $37 billion, it came in with $7.4 billion up from $5.9 billion last quarter.

With a $50B run rate in reach, can anyone stop AWS?

John Dinsdale, principal analyst at Synergy says the leaders are pretty firmly entrenched at this point with huge absolute market numbers and also huge gaps between the cloud providers. “AWS has been a great success story for over ten years now and it remains in an extremely strong market position despite increasing competition from a broad swathe of strong IT industry companies. That is a great testament both to Amazon and to the AWS leadership team and you’d have to suspect that will not change with the new regime,’ he told me.

He sees Microsoft as a worthy rival, but one that is bound to hit a growth wall at some point. “It is certainly feasible that Microsoft will continue to narrow the gap between itself and Amazon, but the bigger Microsoft Azure becomes the tougher it is to maintain really high growth rates. That is just the law of large numbers.”

Meanwhile, market share at the bottom of the cloud infrastructure space continued to decline even while the number of dollars at stake have continued to expand dramatically. “The market share losers have been the large group of smaller cloud providers, who collectively have lost 13 percentage points of market share over the last 16 quarters,” Synergy wrote in a statement.

Dinsdale says all is not lost for these players, however. “Regarding the smaller players (or the big companies that have only a small market share), they can either focus on specific market niches (can be based around geography, service type or customer vertical) or they can try to offer a broad range of cloud services to a broad range of customers. Companies doing the former can do quite well, while companies doing the latter will find it extremely tough,” Dinsdale told me.

It’s worth noting that Canalys has slightly different numbers with a total market of around $142 billion and almost $40 billion for the quarter, but the percentages are in line with Synergy’s: 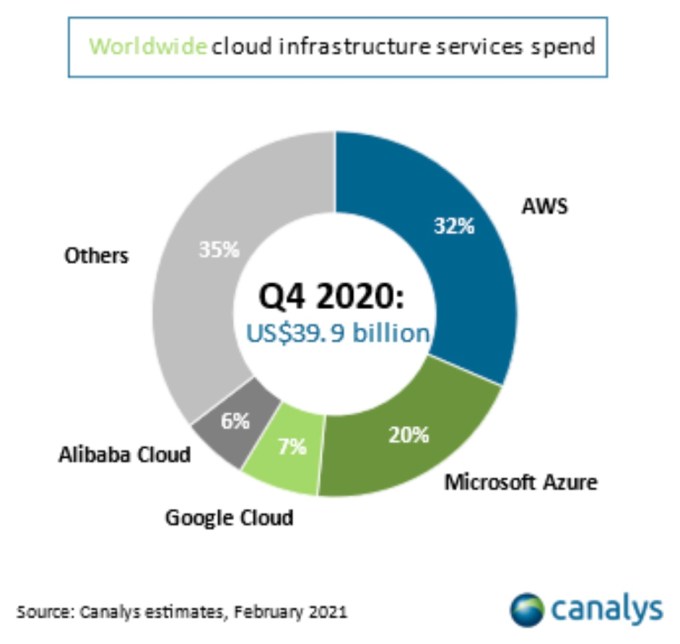 At some point the numbers get so big they almost cease to have meaning, but as large as the public cloud revenue numbers become, they remain a relatively small percentage of overall worldwide IT spend. According to Gartner estimates, worldwide IT spend in 2020 was $3.6 trillion (with a T). That means that the cloud infrastructure market accounted for just 3.85% of total spend in 2020.

Think about that for a moment: less than 4% of IT spend currently is on cloud infrastructure, leaving so much room for growth and for those billions to grow ever bigger in the coming years.

It would certainly make it more interesting if someone could come in and disrupt the leaders, but for now at least they are going to be hard to push out of the way unless something unforeseen and dramatic happens to the way we think about computing.