Menu
VMware is bringing VMs and containers together, taking advantage of Heptio acquisition

At VMworld today in San Francisco, VMware introduced a new set of services for managing virtual machines and containers in a single view called Tanzu. The product takes advantage of the knowledge the company gained when it acquired Heptio last year.

As companies face an increasingly fragmented landscape of maintaining traditional virtual machines, alongside a more modern containerized Kubernetes environment, managing the two together has created its own set of management challenges for IT. This is further complicated by trying to manage resources across multiple clouds, as well as the in-house data centers. Finally, companies need to manage legacy applications, while looking to build newer containerized applications.

VMware’s Craig McLuckie and fellow Heptio co-founder, Joe Beda, were part of the original Kubernetes development team They came to VMware via last year’s acquisition. McLuckie believes that Tanzu can help with all of this by applying the power of Kubernetes across this complex management landscape.

“The intent is to construct a portfolio that has a set of assets that cover every one of these areas, a robust set of capabilities that bring the Kubernetes substrate everywhere — a control plane that enables organizations to start to think about [and view] these highly fragmented deployments with Kubernetes [as the] common lens, and then the technologies you need to be able to bring existing applications forward and to build new application and to support third party vendors bringing their applications into [this],” McLuckie explained.

It’s an ambitious vision that involves bringing together not only VMware’s traditional VM management tooling and Kubernetes, but also open source pieces and other recent acquisitions including Bitnami and Cloud Health along with Wavefront, which it acquired in 2017. Although the vision was defined long before the acquisition of Pivotal last week, it will also play a role in this. Originally that was as a partner, but now it will be as part of VMware.

The idea is to eventually cover the entire gamut of building, running and managing applications in the enterprise. Among the key pieces introduced today as technology previews are the Tanzu Mission Control, a tool for managing Kubernetes clusters wherever the live and Project Pacific, which embeds Kubernetes natively into VSphere, the company’s virtualization platform, bringing together virtual machines and containers. 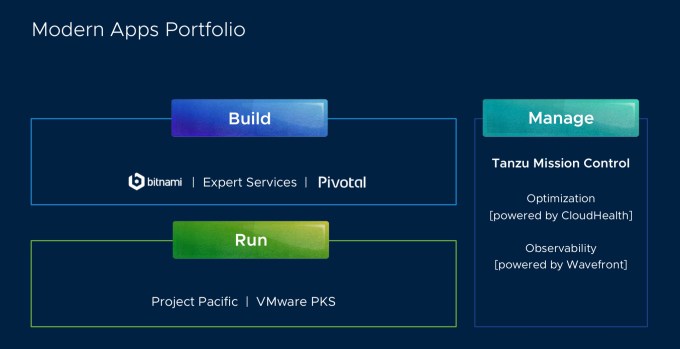 McLuckie sees bringing virtual machine and Kubernetes together in this fashion provides a couple of key advantages. “One is being able to bring a robust, modern API-driven way of thinking about accessing resources. And it turns out that there is this really good technology for that. It’s called Kubernetes. So being able to bring a Kubernetes control plane to Vsphere is creating a new set of experiences for traditional VMware customers that is moving much closer to a kind of cloud-like agile infrastructure type of experience. At the same time, Vsphere is bringing a whole bunch of capabilities to Kubernetes that’s creating more efficient isolation capabilities,” he said.

When you think about the cloud native vision, it has always been about enabling companies to manage resources wherever they live through a single lens, and this is what this set of capabilities that VMware has brought together under Tanzu, is intended to do. “Kubernetes is a way of bringing a control metaphor to modern IT processes. You provide an expression of what you want to have happen, and then Kubernetes takes that and interprets it and drives the world into that desired state,” McLuckie explained.

If VMware can take all of the pieces in the Tanzu vision and make this happen, it will be as powerful as McLuckie believes it to be. It’s certainly an interesting attempt to bring all of a company’s application and infrastructure creation and management under one roof using Kubernetes as the glue, and with Heptio co-founders McLuckie and Beda involved, it certainly has the expertise in place to drive the vision.