Menu
With a $50B run rate in reach, can anyone stop AWS?

AWS, Amazon’s flourishing cloud arm, has been growing at a rapid clip for more than a decade. An early public cloud infrastructure vendor, it has taken advantage of first-to-market status to become the most successful player in the space. In fact, one could argue that many of today’s startups wouldn’t have gotten off the ground without the formation of cloud companies like AWS giving them easy access to infrastructure without having to build it themselves.

In Amazon’s most-recent earnings report, AWS generated revenues of $11.6 billion, good for a run rate of more than $46 billion. That makes the next AWS milestone a run rate of $50 billion, something that could be in reach in less than two quarters if it continues its pace of revenue growth.

The good news for competing companies is that in spite of the market size and relative maturity, there is still plenty of room to grow.

While the cloud division’s growth is slowing in percentage terms as it comes firmly up against the law of large numbers in which AWS has to grow every quarter compared to an ever-larger revenue base. The result of this dynamic is that while AWS’ year-over-year growth rate is slowing over time — from 35% in Q3 2019 to 29% in Q3 2020 — the pace at which it is adding $10 billion chunks of annual revenue run rate is accelerating.

At the AWS re:Invent customer conference this year, AWS CEO Andy Jassy talked about the pace of change over the years, saying that it took the following number of months to grow its run rate by $10 billion increments:

Extrapolating from the above trend, it should take AWS fewer than 12 months to scale from a run rate of $40 billion to $50 billion. Stating the obvious, Jassy said “the rate of growth in AWS continues to accelerate.” He also took the time to point out that AWS is now the fifth-largest enterprise IT company in the world, ahead of enterprise stalwarts like SAP and Oracle.

What’s amazing is that AWS achieved its scale so fast, not even existing until 2006. That growth rate makes us ask a question: Can anyone hope to stop AWS’ momentum?

The short answer is that it doesn’t appear likely.

A good place to start is surveying the cloud infrastructure competitive landscape to see if there are any cloud companies that could catch the market leader. According to Synergy Research, AWS remains firmly in front, and it doesn’t look like any competitor could catch AWS anytime soon unless some market dynamic caused a drastic change. 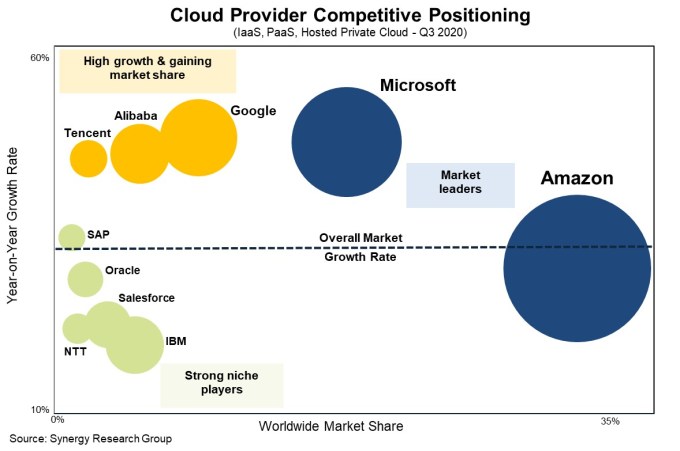 With around a third of the market, AWS is the clear front-runner. Its closest and fiercest rival Microsoft has around 20%. To put that into perspective a bit, last quarter AWS had $11.6 billion in revenue compared to Microsoft’s $5.2 billion Azure result. While Microsoft’s equivalent cloud number is growing faster at 47%, like AWS, that number has begun to drop steadily while it gains market share and higher revenue and it falls victim to that same law of large numbers.