WordPress.com, a division of Automattic, is launching a new product called P2. And this time, it’s all about improving internal communications for private groups. As a remote company, Automattic has been using P2 internally for years to communicate asynchronously. It’s a place to share long-form posts, a repository to keep onboarding documents and other important evergreen documents.

P2 is built on top of WordPress . You can view it as a sort of WordPress for teams that is heavily customized around the concept of sharing ideas with other team members. Companies now rely on multiple internal communication tools. P2 can replace some of them but doesn’t want to reinvent the wheel altogether.

For instance, P2 isn’t a Slack competitor. You can’t use it for real-time chat. But P2 can be used to share important announcements — the kind of announcements that you can find on an intranet portal.

You can also use it for long-term projects and create your own P2 for your team in particular. In that case, P2 competes more directly with Workplace by Facebook or Yammer. In order to make it more useful for asynchronous communications, P2 has some features that make it more useful than a simple WordPress blog.

For instance, you can @-mention your co-workers to send them a notification and follow posts to receive updates. You can also create checklists, embed PDF documents, stick important posts at the top of the homepage and stay on top of what happened while you were gone. There are dedicated menus to view new posts, new comments and mentions you’ve received.

While you can theoretically access the classic WordPress back-end, you can write new posts, edit existing posts and write comments without ever leaving P2. The company uses the new block editor that lets you add headings, lists, video embeds and media in a visual way. It works a bit like Squarespace’s editor or Notion, and it makes a ton of sense to leverage the new editor right next to content you’re viewing, commenting on, etc.

For content that always remains relevant, you can create documents, which are pages without a specific publishing date and without comments. These documents are sorted in their own category and can be easily shared across a company. You can use documents for internal policies, guides or important contact information. Many companies rely on Google Docs and shared folders in Google Drive for this kind of document. P2 could potentially replace those shared folders and become the main information repository.

By default, P2 sites are private, but you can make them public in case you want to share updates on your product with clients or use P2 for public events.

If you’re familiar with the WordPress ecosystem, you might already know a WordPress theme called P2. The new P2 announced today is a new product that takes that idea to the next level. Automattic has been iterating on the concept and using it widely with its 1,300 employees across 912 internal P2 sites.

WordPress.com is going to offer hosted P2 instances. Anybody can create a P2 for free and invite other people. Eventually, WordPress.com plans to offer paid subscriptions for advanced features. In other words, P2 is going to be a software-as-a-service product. But there will be a self-hostable, open-source version in the future as well.

I played around with a few P2 instances, and the overall impression is that the complexity of WordPress remains hidden by default, which is a good thing. It’s a clean and focused product that would work particularly well in that spot between company-wide emails and announcements getting lost in Slack. 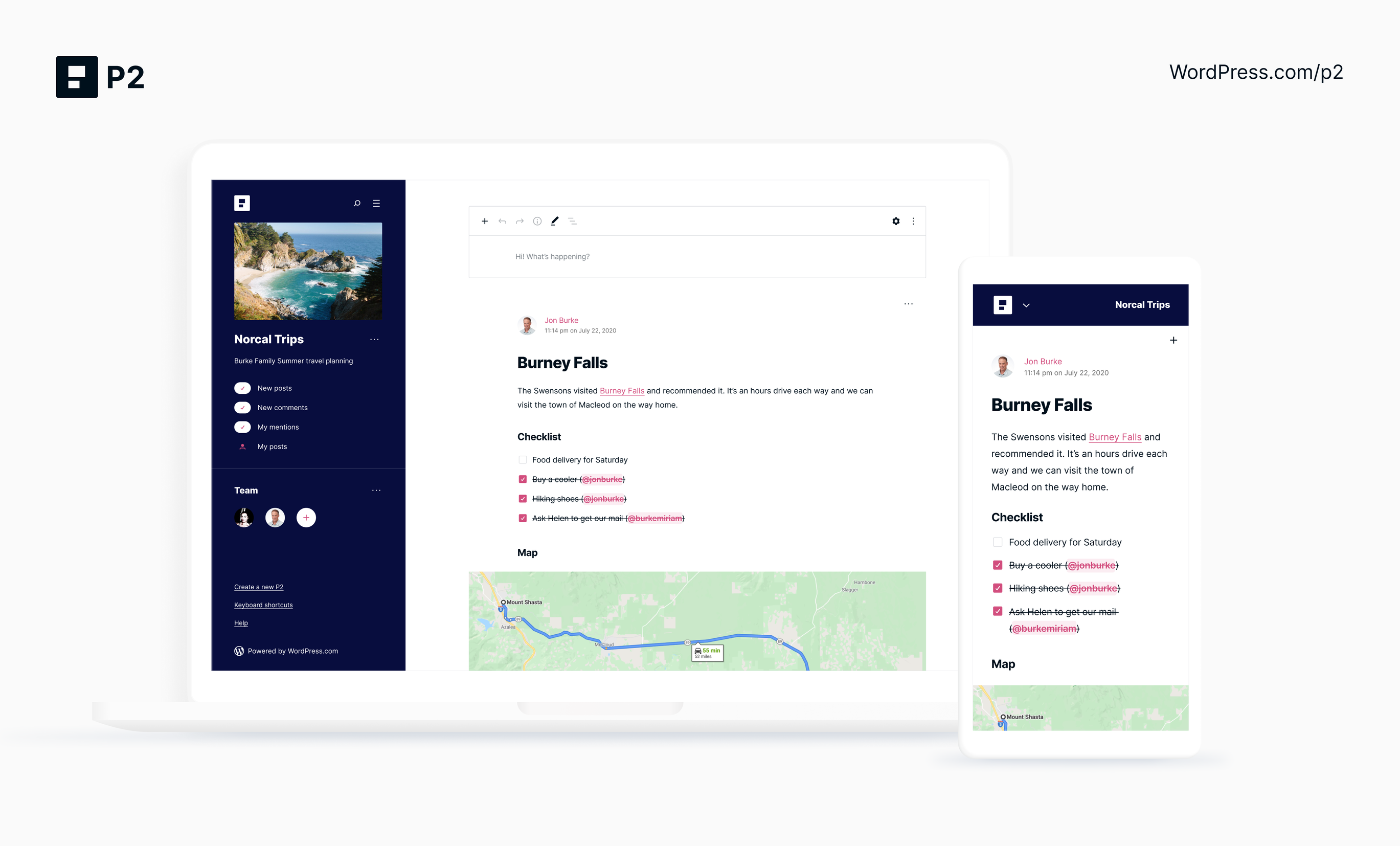